The cynosure of this week’s extended-feature episode was a brief scene of the surviving Confederados  terrorizing the townsfolk of the small village where Lawrence’s family lives. They do all the cliched Western acts such as tyrannizing the bartender and coercing the townspeople to huddle together in the church, and it’s effective because it feels so much like a grimy spaghetti Western, right down to the way William eventually responds to the behavior. 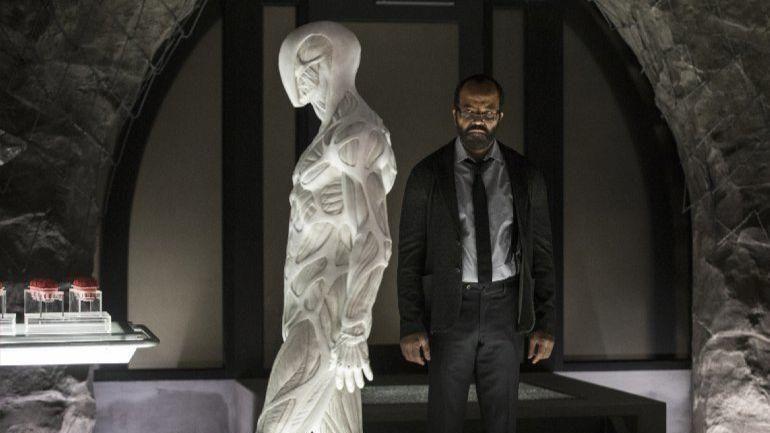 A rather more pressing question surrounding Westworld is just what Delos is trying to get out of this godforsaken park. Does it merely compose of decades of blackmail material on the world’s richest and most powerful people, or is it something somehow even more nefarious? Certainly, William’s heartless experiments with the host incarnation of James Delos suggest something more dangerous than simply keeping a record of the misdemeanors of rich deviants. Immortality, giving a human brain an essentially unstoppable robot body, has long been a science fiction dream, and it appears that Delos has spent decades trying and failing to perfect the process.

It is gestured from this ideal that Robert Ford has stumbled across something awfully similar to being able to live forever, assuming Arnold didn’t beat him to it first. This is a suggestion put forth in the script from Gina Atwater and Jonathan Nolan; there’s a reason Robert keeps popping up in William’s narrative. Perhaps this is guilt on the part of William or perhaps Robert, as everyone seems to suspect online, has become the ghost in the machine, hopping from host to host and pulling strings from beyond the grave – as if he is a poltergeist plagued between heaven and earth.

It is a tragic sight watching James Delos glitch and fail time and time again as his organic-based mind refuses to accept its new robotic body. To watch James repeat the same day over and over again, only for his mind to fail him, is tragic. Peter Mullan and Jimmi Simpson tell a wonderful series of stories in a short amount of screen time, and it’s impressive physical acting from Mullan as he communicates James’s deterioration and breaking down with tics and awkward body language. James Delos clearly isn’t a good man, but he doesn’t seem to deserve this kind of fate, even if the dispassionate William is willing to put him through it time and time again to try and perfect the secret of immortality.

Robert Ford appears to have achieved the dream of Delos simply by being willing to abandon his physical body entirely or his prowess at programming enabling him to run the game without his physical presence. This is apparently a sign of Robert’s triumphant gamesmanship. He has cunningly and ingeniously turned everything people thought they wanted from Westworld into a reality. This has resulted in tonnes of screaming and shooting and dying due to the idyllic emergence of reality from Ford’s complex consciousness.

Bernard is an individual hell-bent on self-preservation (from an initial glance), and Ford seems to be expressing dissatisfaction with William as an employer (or as a person). Ford was clearly secretive towards the company of Delos, and likewise, Bernard continues to keep secrets from the world. Both Bernard and William have seen themselves revealed by Westworld as something other than what they once thought they were, and both are seeking to, perhaps, atone for past sins or absolve themselves of them by plunging headlong into fiction and ignoring past mistakes.

Bernard can only lie for so long. William can only run so far. And potentially living forever has a price that must be paid. Whether that price is loss of family or lost of self remains to be seen, but whatever form it may take, the price is steep and only the most dedicated would be willing to pay it.

It’s a very difficult task to redeem a character so nefarious and merciless like the Man In Black, but Ed Harris is more than up to the task. When faced with stereoypical villainy like that of Craddock, James shows them what the face of death truly looks like. Certainly, it seems there are some aspects of sympathy here, some crack in his plated armor sentiment; after all, as the Robert Ford stand-in of Lawrence’s daughter tells him at the end of the episode, looking forward won’t solve this riddle, and that one good deed won’t change his perception of William. Like the redirected railroad, Robert’s game has one real end: he wants to make William reflect on his past. Westworld doesn’t tell you who people want to be as much as it tells you who they really are. William, from what he says to Craddock, is Death incarnate.