The greatest show of all time now has a sequel in the form of a movie and everybody everywhere is hyped (pardon the slang).

The initial IMDb rating was a whopping 9.3/10 and the audience score on Metacritc 8.9/10. Amazing stats to start off with. However, critics soon began to slate the film, with Deadline labelling it a ‘half measure sequel’ and Vox saying ‘it’s going nowhere a lot of the time’. Besides these reactions, there is still wide critical appraisal for the film, which fans describe as a ‘masterpiece’ and many believing Aaron Paul deserves awards for his performance.

In response to critics, I see it as this – the movie was not made for you, it was made for us the fans and we are satisfied by the film. The movie remedies a number of loose ends and concludes Jesse’s story arc beautifully. It was always going to be hard, impossible even, to emulate the greatness of its parent show Breaking Bad, but, in conjunction with the show, the character arc of Jesse resumed and was finally completed. We see him being given the freedom and ending that he deserved.

The film picks up following the events of Breaking Bad, when Jessie Pinkman leaves Walt and drives away in a Chevrolet El Camino (Spanish for ‘the way’ or ‘the road’). Jesse is haggard and scarred both physically and mentally.

We see a flashback of Jesse and Mike. It seems to be set around the time of the season 5 episode, ‘Buyout’. Mike tells Jesse that he cannot ‘put things right…that’s the one thing you can’t do’. A strong message and a strong way to begin the film with the wise words of wise guy Mike.

We see Jesse as he seeks refuge at Skinny Pete and Badger’s place. They are shocked of his appearance and infamy stemming from recent reports concerning the Neo-Nazis and Heisenberg. Jesse is on edge and restless until he settles and cleans himself. He tells Pete and Badger that he needs to go away and disappear. They call the scrapyard owner, Old Joe, to dispose of Jesse’s El Camino but we soon discover that the police are tracking him.

Skinny Pete proposes that the El Camino remain at his, while Badger drives his own car towards the desert and wipes down prints. This leaves Skinny Pete with the alibi that Jesse took Badger’s car. Pete says to Jesse that he can handle police interrogations and can pass a lie detector test. Ironically, we see him in a police interview concerning Jesse’s whereabouts in the Comicon teaser trailer.

Jesse’s long walk to freedom begins as he travels to an apartment previously owned by Todd Alquist (Jessie Plemons). Through yet another set of flashbacks, we see Todd take Jesse (while he was held prisoner by Todd’s uncle) on various errands. On one occasion, he takes him to his apartment to help dispose of a dead body. The two head to the desert to bury it. Todd asks Jesse to get something from his glovebox and while doing so he sees a gun there. Jesse takes the gun and points it at Todd. Jesse seemed to have Stockholm syndrome, as Jesse crumbles and cannot shoot his captor.

When at the home, Jesse spots Todd hiding money. This flashback is vital to the film’s plot. Jesse revisited Todd’s apartment after he strangled him in the season five finale, in search for the money. He sneaks into the home and scours each room until he finds the cash in the cavity of a fridge door. During this moment, Jesse sees what he believes are detectives and hides. The two ‘detectives’ search the place and one of them finds Jesse. Jesse takes him hostage and walks to the other ‘detective’ to allow him to escape. This plan falls through and Jesse is soon detained.

The ‘detectives’ are revealed to be construction workers who knew about Todd and his money. Jesse bargains with them by telling them they’ll need his help to find the money. Jesse’s finds them the money and persuades one of them to give him a third of the cut.

When he leaves, Jesse recognises the van, Kandy Welding Co., the company who made the chains bounding him to the ceiling of the Neo-Nazi meth lab. Another flashback explains their role, as it shows a worker from the company at the lab where Jesse was kept a slave. He reinforces the chains firmly and Todd’s uncle makes a bet. He bets for $50 that Jesse could break the chains above him. Jesse is coerced into attempting to break the chains by running and pulling them with his weight. The welder wins the bet. It is clear that Jesse had been mentally scarred by the abhorrent action so he reacts accordingly later in the film.

En route to a vacuum cleaner store owned by Ed Galbraith – Saul’s contact who gave Walt a new start – Jesse wishes to buy a new life. He enters and attempts to remember the code for this service – it was a very specific make and model of vacuum – but he forgets. He barters and begs Ed who ultimately accepts his plea. The service costs $150,000 and Jesse empties his bag of cash found at Todd’s. He is a couple of grand short and proceeds to beg Ed again to let him go. A stubborn Ed strongly denies his request and calls the police about a disturbance in his shop. Jesse leaves searching for additional funds.

There is an amazing and beautiful flashback to season 2 as Bryan Cranston reprises his role as Walter White. He and Jesse are seen eating in a diner. He tells Jesse that he has waited his whole life to do something special whereas he can do whatever he wants as he has his youth. He prompts Jesse to think of his future, by advising him to go to college, saying that a business major would be perfect given his experience in the drug game. This flashback gave fans including me pure joy as the show’s titular lead gives Jesse sound advice, relevant to the movie.

Looking for the $1,800 he needs to buy his freedom, Jesse visits Kandy Welding Co., where the thieves from Todd’s apartment work. He infiltrates the area they’re in without hesitation and faces five people including the two fake detectives. The boss, who was at Todd’s apartment, behaves erratically and decides that he and Jesse have a Wild West-style shoot-out for the money. They take their positions opposite each other and within a second they draw and Jessie quickly unleashes a handful of shots to instantly kill him.

Consequently, a gun fight breaks out between the remaining men who are eventually incapacitated. As revenge for the welders neglect, Jesse vents his anger and lights up the building with explosives. This is reminiscent of the explosion he and Walt caused at Gus Fring’s meth super lab after Fring’s death. Jesse leaves with the cash, with the explosion illuminating the background in a classic Hollywood action style.

There is a flashback to season 2 when Jesse was with Jane (Krysten Ritter). Jane  said to Jesse to change your own destiny with a reference to the universe taking you on a journey. Jane tells Jesse that she was joking about what she said. This scene epitomises Jesse’s utter love for Jane and their undying bond. It serves almost as a nostalgic mechanism to remind the audience of Jesse’s life before it crumbled, and his first true love since the life-changing meth cooking extravaganza. Fans, including me, were truly excited about the cameo and its links and importance to the film.

Jesse returns to Ed’s store with the remaining $1,800 and leaves Albuquerque for Alaska, the final frontier between the US and Canada. On arrival, Jesse says goodbye to Ed, who asks him whether he wants to give any final messages to anyone. He gives Ed a letter in an envelope and the camera changes angles to behind Ed with Jesse unfocused in the background. We see the letter in Ed’s hand and it’s addressed to Brock, the son of Andrea – Jesse’s girlfriend who Todd murdered in BrBa’s final season to state that his uncle will act upon his threats. This was a very harsh warning to tell Jesse that the Neo-Nazis would kill Brock.

The film ends with Jesse driving away along roads surrounded by snowy scenery.

We are happy for Jesse and satisfied with his freedom but, we see him alone in a rural and quiet Alaska; he is isolated as an outcast from civil society. He lives in a cold, thus symbolically emotionless, new world, an ‘undiscovered country’ you might say.

Vince Gilligan (the creator of the Breaking Bad universe) is known for using the colour of clothing as a gateway into a character’s feelings and mindset. Throughout most of the movie Jesse wore black as he was frantic and on the move. This colour represents Jesse’s dark experiences and despair following his 2-3 year stint as a meth cook and notorious criminal.

During the last few episodes of Breaking Bad, we see Jesse wearing black, as he was imprisoned in darkness and his mind was home to a void of negativity. We see how Jesse was and will always be psychologically impaired due to his disturbing past no matter how free he is.

To some extent, we see how Jesse is trapped in his perturbed mind, so cannot experience any sense of full liberty.

In the flashback with Walt, we see Jesse wearing a black jacket and a white t-shirt. White is synonymous with hope and represents a good heart. At this moment in time, Jesse was content and had a lot of positive potential, especially given his recent hoard of ill gotten gains. This colour coordination is mirrored in the film’s final scene as Jesse wears a woolly white jumper – showing hope and warmth – as he ventures into Alaska. 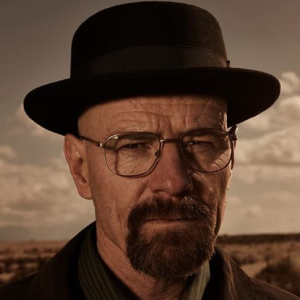