The film begins with Heimdall, Loki, Thor, Hulk, Thanos and his minions. Thanos is already equipped with the power stone through destroying the city of Xandar. With Thor held by the head, Thanos demands the space stone within the Tesseract from Loki. Loki gives in to Thanos due to the torture of his brother and gives the space stone. Following this, Loki feigns fealty to Thanos which he is punished for through ruthless asphyxiation eventually killing Tom Hiddelston’s beloved God of Mischief. Prior to this poignant moment the Hulk is introduced and barges Thanos who recovers and renders Hulk’s strength inconsequential using the power stone before pounding him to subservience. Miraculously, Heimdall in his final action uses the Bifrost and transports the Hulk to Earth to heal. He succeeds but is consequently stabbed to death by Thanos .

The movie then shifts to New York, Earth with Doctor Strange and Wong impacted by Bruce Banner entering the sanctum. They call upon Tony Stark and are briefed on Thanos and the infinity stones. A spaceship containing half of the Black Order then penetrates the atmosphere in New York with the afore mentioned heroes joining forces to defeat them. Spider-Man joins them and follows Iron Man to the spaceship which Strange is prisoner upon. Bruce is unable to morph into the Hulk and is left out of the battle. Meanwhile in Scotland, Vision and Scarlett Witch are attacked by two other Black Order members and are helped by the intervention of Captain America, Red Falcon and Black Widow.

The Guardians of the Galaxy intercept with Thor who they nurse to consciousness with Groot and Rocket Racoon following him to the intergalactic dwarven weapons forge. The remaining Guardians venture to Knowhere where they encounter Thanos who manipulates reality with the reality gem. He then takes Gamora prisoner and grills her due to his knowledge that she had coordinates for the mysterious soul stone. Thanos arrives at his destination, Vormir, where none other than the Red Skull guards the stone. He informs Thanos he must sacrifice a loved one for the stone so he kills Gamora in an emotional, cinematic and shocking twist. 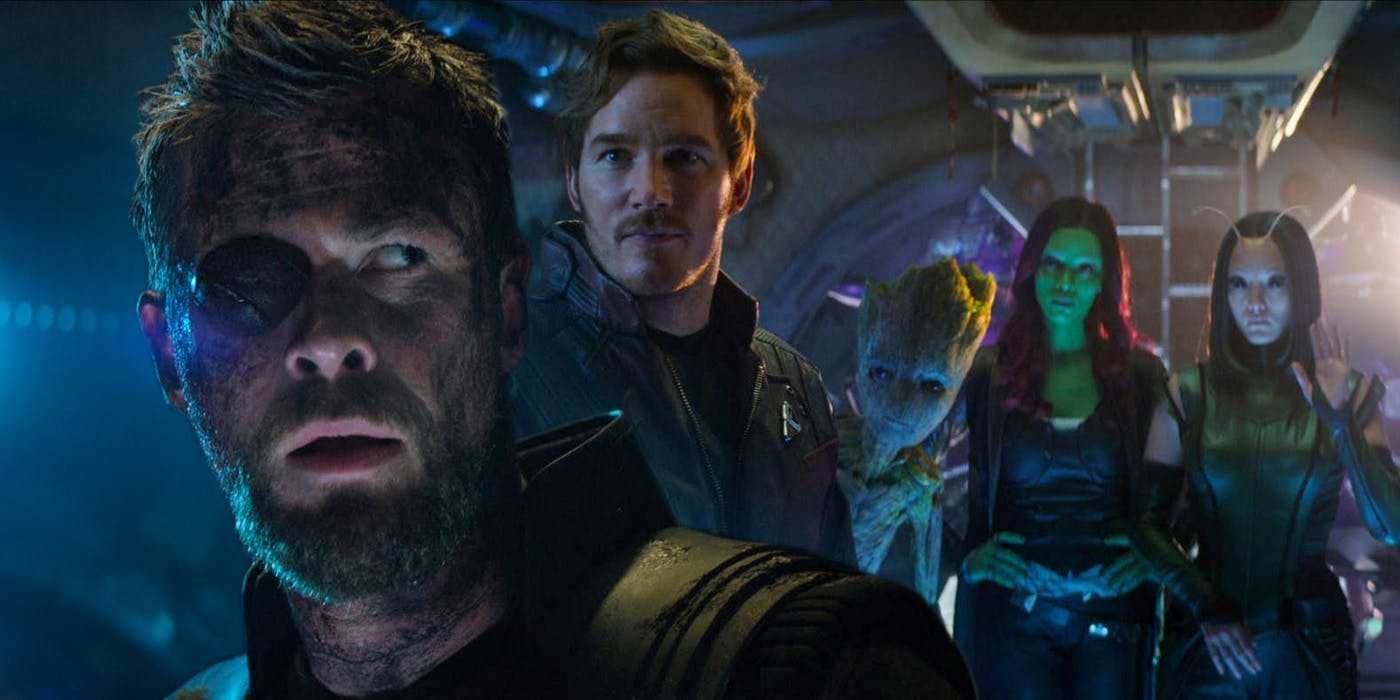 Meanwhile, Doctor Strange and co, meet the Guardians of the Galaxy on Titan, the home of Thanos,  with Strange looking to the future to 14,000,605 possible outcomes of the Infinity War which he states only 1 entails a victory for them. Thanos then enters Titan to get the time stone from Strange but is ambushed by the Guardian of the Galaxy and is overpowered by the combined power of the heroes. The Infinity Gauntlet is then almost taken off by Iron Man and Spider-Man until Star Lord is enraged by Thanos confessing to Gamora’s murder and punches him which enables him to grasp his gauntlet and transport to Wakanda where the remainder of the movie takes place. Prior to transportation, Thanos attacks Strange for the time gem and is confronted by Iron Man who is stabbed but Strange bargains Tony’s life in return for Thanos getting the stone.

After Vision, Captain America et al leave Scotland they meet Bruce and journey to Wakanda to find Shuri who must remove the mind stone from Vision so he is not killed when Thanos arrives. Black Panther is greeted by the Avengers on Earth and prepare for the impending doom of Thanos. The Black Order release spaceships containing beasts of no conscience who plunder into the Wakandan barrier killing themselves until T’Challa opens part of the barrier to annihilate this threat. The battle then commences.

Thor, with Groot and Rocket Racoon, who he calls ‘rabbit’, meet the dwarven forgerer Eitri in Nidavellir (played by Peter Dinklage from Game of Thrones) and must prize and hold open the eye of a star to heat the metal for Thor’s new hammer. Thor survives barely and is rejuvenated by his new hammer, Stormbreaker, which channels his electric power. Thor then enters Wakanda and wipes out the mindless, dog-like creatures. During this entrance Shuri is encountered by a Black Order member with Vision forced to drop from the building to the Wakandan forest to protect the mind stone. Thanos enters Wakanda for the final stone and walks through the Avengers as if they were nothing with through the aid of his infinity gauntlet with Captain America momentarily resisting the force of the gauntlet.. Simultaneously, Wanda Maximoff (Scarlet Witch) is ordered by Vision to destroy the mind stone and succeeds until Thanos uses the time stone to reverse its destruction and follows this act by crudely removing the gem from Vision’s forehead. With all 6 infinity stones, Thanos needs to snap his fingers to fulfil his goal but Thor forcefully throws his hammer at Thanos’ chest which renders him defenseless until he acknowledges his ability to still snap his fingers. With the audience locked in disbelief, Thanos remarks, ‘You should have aimed for the head’, and succeeds in his lifelong aim of destroying half of the universe. Main characters disintegrate to ash including: Black Panther, Doctor Strange, Spider-Man, Bucky, Groot and many others. Thanos is left reunited with the soul of a young Gamora in the soul world and relaxes in the wake of a beautiful horizon. The film ends with him smiling triumphantly and with accomplishment and satisfaction.

The post-credits scene is of Nick Fury (Samuel L. Jackson) and his S.H.I.E.L.D partner, Maria Hill (Cobbie Smulders). As he and most surrounding him also disintegrate to dust he manages to send a distress signal to Captain Marvel. This builds anticipation for audiences who are in need of yet another superhero fix in the form of the upcoming 2019 Marvel movie Captain Marvel.

With the exclusion of Ant Man from the movie, as well as Hawkeye, the two are most likely going to star in the upcoming Untitled Avengers movie. However, with Ant Man and the Wasp hitting the silver screen in July, audiences around the world will be able to see Paul Rudd’s superhero back in action.

I would rate this box office masterpiece a solid 10/10.